Some of this is about Mongoose Traveller.

I resumed work on my space elevator last night. It was modeled in Hexagon 1.21 using a repeated stack of links. I think it's 12km tall. Might be more than that. So I can repeat what I've built onto further stacks until it reaches some orbit height somewhere. But for close shots, I had enough of the elevator to work from for this Vue scene.

The longest part was just deciding how big the anchor should be and what that all looks like. I still have a lot of structure to add around the ground connection. I'm thinking of having the elevator go down a ways into the ground. But I still need something in the ground for the elevator shaft to hang onto. So that is being worked out.

This shot could be of a new (found) world. Vacant. For reasons, an elevator was approved first before any starport construction. Maybe the starport will be pre-fabbed on the spot, depending on what materials are left behind when the elevator is completed. If in twenty years, this world is expected to be a busy place, a class A starport will be attached near the base, along with a highport at the other end. Otherwise, it will default to a class C with just drones roaming the wastes until someone wants to make something out of the world.

I needed a real basic image like this for artifact use in a one-shot. Maybe two one-shots ago. So now I made time to make one for show-n-tell with players for the next time. Depending on how that elevator holds up, more stuff may get added to it for another possible one-shot.
Posted by Shawn Driscoll at 1:25 AM No comments: 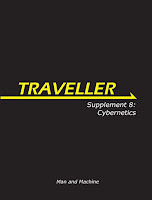 I was asked about 1st edition Mongoose Traveller about a week ago. At a game store, someone brought up the green titled books, and if I was going to keep mine or not.

As I was heading to my car, I was thinking about the different books. One of them was Cybernetics. And I had forgotten why that book was yellow instead of green titled. I think I was driving to Krispy Kreme, still thinking about it.

I just now thought about that question again. And looking at my Traveller bookshelves here, I'm seeing that the book is indeed one of the yellow ones. Which means the rules are not strictly for the Imperium setting. They're more generic in their use.

So I started looking at the other yellow titled books I have. I'll be keeping those as well, because of the generic-ness of them.

Posted by Shawn Driscoll at 12:06 AM No comments:

I'm looking for Beta testers who can test an NPC generator for the next two weeks on their Windows computers.

Message me your email if you want to be a tester.﻿
Posted by Shawn Driscoll at 10:23 PM No comments: 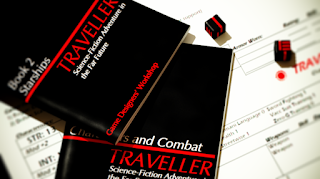 It's 2016, and people still confuse RPG system with setting.

They'll say how they love a setting, for an RPG that has no setting. Or they'll say they love a game system, when they are talking about a setting source book.

They are the same chuckle heads that say, "but that isn't how Star Wars works", when talking about Traveller's game system.

Anyway. When someone tells me they love Traveller, it means nothing to me. It's like saying they love TV. I like to know what part of Traveller they're talking about. Make them think about what they just said. It only helps both of us.﻿
Posted by Shawn Driscoll at 10:45 AM No comments: